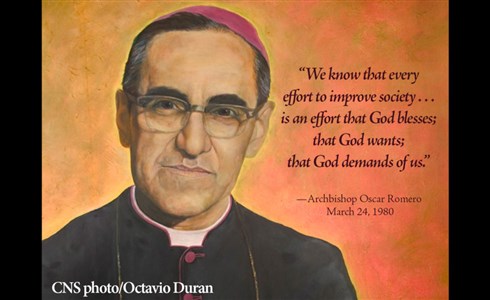 I have always bristled when a preacher or a workshop leader, who has access to a microphone, says something like “You can hear me, can’t you?  I don’t like using microphones.”

No one seems to object, and they proceed to put aside the sound system to the detriment of someone out there in the audience who cannot hear well.  The non-hearing folks rarely speak up, but they sit in silence, missing much of what is being said by the speaker.

Providing amplification for physical hearing is vitally important, but not as important as amplifying the voice of people suffering on the margins of life.  Often we are “deaf” to the cries of the victims of injustice, and thus, we need to hear the voice of “God’s microphone” for justice.

The most shining example of one who spoke loudly for justice in our time was Bishop Oscar ArnulfoRomero (y Galdámez).  We remember the 40th anniversary of his March 24, 1980, assassination this month.

He was the Roman Catholic Archbishop of San Salvador, in El Salvador, during a time of widespread violence and oppression of the poor there because of an evil dictatorship.  When he first became the fourth bishop of San Salvador he shunned the work of justice in favor of maintaining church order and sacramental ministry.

However, in 1977 a Jesuit priest, Rutilio Grande, Romero’s personal friend, was assassinated for speaking out for the poor.  This profoundly affected him, and he prophetically wrote at the time, “If they have killed him (Grande) for doing what he did, then I too have to walk the same path.”  From then on, he became a bold proponent for social justice, speaking out against poverty, injustice, disappearances and torture.

As his “microphone” continued to amplify the message, he encouraged others to join in his justice ministry, and there was a groundswell of support.  As a result, the church began to experience a swift push-back of persecution from the government that legitimized terror and murder.  This included threats, intimidation, community raids and bombings.

Romero continued his ministry despite it all. But he was assassinated by gunshot in the church while celebrating Mass on a Sunday morning. No one was ever convicted of his murder.

Romero was canonized as a saint on October 14, 2018, by Pope Francis.  The United Nations General Assembly proclaimed March 24 as the “International Day for the Right to the Truth concerning Gross Human Rights Violations and for the Dignity of Victims,” which recognizes the important work and values of Archbishop Oscar Arnulfo Romero. (December 2010).

His voice was not silenced on the day of his death. Indeed, his words are still an inspiration to many.

These words, for example:

A bishop will die, but the Church of God, which is the people, will never perish. I do not believe in death without resurrection. If they kill me, I will rise again in the people of El Salvador.

God’s microphone never stops proclaiming justice!  Because of his martyrdom, many have been inspired by his work, and countless Christians across the globe continue to be voices for the poor and mistreated to this day.

You too can join this vital Christian ministry of outspoken justice.  As microphones enhance physical hearing, God’s microphones speak a loud word of justice and relief for a world that is bruised and broken. Every day you have a chance to do something or say something that will make a difference.

In the good bishop’s own words:

Dr. Edgardo A. Colon-Emeric (Assistant Professor of Christian Theology at Duke University Divinity School and author of Oscar Romero’s Theological Vision) quoted Romero as saying, “In this hour, when one feels like trashing everything, leaving the country and abandoning everything, remember this about Christ: ‘A bruised reed he will not break and a dimly burning wick he will not quench.’  Let us keep stirring.  Let us keep building.”

Look around you for the bruised and discouraged people and do what you can to call attention to the systems that create and maintain their suffering. Commit yourself to engaging in ministry to alleviate their pain.

“They who have a voice,” said Bishop Romero, “must speak for those who are voiceless.”

Republished from The Bishop’s Blog.