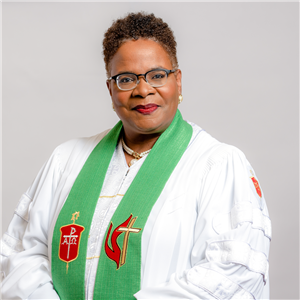 Bishop LaTrelle Easterling is the episcopal leader of the Peninsula-Delaware & the Baltimore-Washington Conference, the oldest and most diverse annual conference in The United Methodist Church.  She was appointed to this office in September 2016, following her election to the episcopacy that July.

Prior to being elected, she served as Dean of the Cabinet of the New England Conference and as a superintendent, leading 57 congregations in the Boston Hope District.

She was ordained a Deacon in 1995 and an Elder in 1997, and was pastor of Union UMC in Boston’s historic South End, Pearl Street UMC in Brockton, Mass., and Old West Church, UM, in Boston.

Easterling is a native of Indianapolis, Indiana. The child of Mary and Walter Miller, she grew up attending University UMC, under the leadership of Rev. George Rice and then Rev. Harry A. Coleman. As an active United Methodist, Easterling sang in numerous choirs, served as a youth group leader and Sunday school teacher. Upon moving to Denver, Colorado, she joined the African Methodist Episcopal Church, where she learned the art of preaching and the importance of advocacy and justice ministries.

Prior to entering the ministry, she worked as a human resources manager and director, and as a prosecuting attorney.

A delegate to General and Jurisdictional Conference in 2012 and 2016, Easterling serves on a number of boards and agencies, including the Committee for the National Plan for Hispanic and Latino Ministries, The Council of Bishop’s Immigration Task Force, the Boards of Directors for Wesley Theological and American University, the Board of Child Care and The Jane Robinson Bancroft Foundation. Easterling also serves as the President of the Northeast Jurisdiction Multi-Ethnic Center, the Anna Howard Shaw Board of Boston University School of Theology, and Boston University School of Theology Dean’s Advisory Counsel. Upon arriving in the Baltimore-Washington Conference, she founded The Seeds of Security ministry, or SOS, which benefits people in crisis who are seeking to leave abusive relationships.

Easterling is a much sought-after speaker and preacher, poet and published author. She has received numerous awards and recognitions, most recently receiving the 2017 Rainbow Push Trombone Award for Faith in Action, presented by the Rev. Jesse Jackson.

She is married to the Rev. Marion Easterling Jr., pastor of Locust UMC in Columbia, and the former pastor of Parkway UMC in Milton, Mass. They have two grown sons, Garret and Miles.